When Tim Nelson, PhD, arrived on Blakely Island for the first time in fall of 1984, he was hooked.

“It was a great way to learn biology as a student,” says Nelson. “Knowing that we were doing real science, actually learning ecology and not just having fun in the woods, is what made it so appealing.”

Photo by Caroline Metsker
Dr. Nelson’s signature in the Island Breeze, the boat taking SPU students to Blakely in 1986. (right side, left of the “10,” and in darker ink).

34 years later, Nelson is a professor of biology at SPU and director of the same Blakely Island Field Station that he visited as a bright-eyed undergraduate. Ever since Dr. Nelson first set foot on the island, he finds new opportunities throughout his career to revisit its serene land and seascape.

As an undergraduate, Nelson always knew he wanted to major in biology, but was debating between medical or graduate school. His choice became easier when he began working in a clinical microbiology research lab at Harborview Hospital while simultaneously diving for his scuba certification in the summer of 1985.

“I remember I was sitting in the lab streaking plates while looking out the window to the sweeping view of Elliot Bay,” Nelson recalls, laughing. “I looked down at the plate, and out the window again, and I thought, ‘I want to be out there, not in here!” 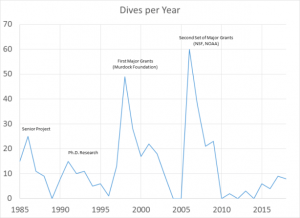 Graph by Dr. Tim Nelson
Dr. Nelson’s graph used to track his diving activity since he gained his certification.

Nelson relieved this itch to be outdoors by taking classes that went to Blakely Island during the weekend.

When summer came, Nelson did not want to stop learning from what Blakely had to offer. He found a job doing menial chores on the island during the summer between his second and third years at SPU.

After each day of splitting shakes, filling pot holes, and washing dishes concluded, Nelson rushed to the marina to get a boat and dive before sunset darkened the deep waters of the Rosario Strait.

“There’s really something about being out on a boat on a sunny day and hopping in the water,” Nelson explains while remembering his first summer on Blakely. “It was really stark, amazing beauty.”

While in graduate school at University of Washington, Nelson assumed his time at Blakely was finished. However, within five years into his graduate education, SPU needed a marine botanist to teach some of the classes that Nelson took as an undergraduate. This just happened to be his field of expertise. 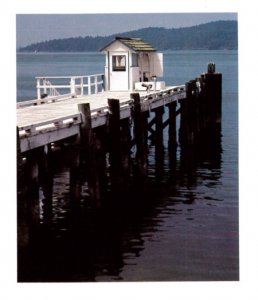 “I definitely made sure to teach classes that had field trips to Blakely!” Nelson laughs.

His grant research focused mainly on blooms of green seaweeds that are found in the oceanic tides around Blakely. With his passion for diving, Nelson spent time conducting studies in saltwater environments that other marine botanists typically avoid, such as the glacial San Juan waters in the dead of winter. 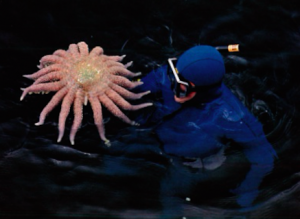 Photo courtesy of Dr. Tim Nelson
A diver pictured in the same diving gear Dr. Nelson wore in the mid-1980s.

However, Nelson believes that science should not pause simply because of an uncomfortable setting for study.

“In ecology, things change,” Nelson explains. “Climates are changing. Fires happen. Earthquakes happen. It matters what patterns are consistent and what holds up over time.”

Nelson’s passion for ecology put him forward as the ideal candidate for Director of SPU’s Blakely Island Field Station in 2003. He enjoys teaching some of the same classes on Blakely that originally opened his eyes to the beauty of marine botany as an undergraduate.

Almost 15 years later, Nelson is still struck by the unmatched splendor and diversity found on Blakely, from the life in the oceanic tides to the vegetation of the deep woods.

When asked which experience stands clearest in his memory over his years at Blakely, he answered without hesitation.

“It’s more of the whole experience where you get that perfect dive,” Nelson says as he leans back in his chair. “You’re coming back at sunset and the orcas have decided to come into Rosario Strait. It’s quite an experience.”