For over four decades Seattle Pacific University has created a presence on Blakely Island. However, Blakely Island’s history has been recognized well before SPU or the 20th century.

Before the arrival of foreign settlers, the land was taken care of by Native American tribes. These Tribes would congregate near Thatcher Bay to hunt, fish, and dry out plant harvests from the wind and rain of the fall and winter.

This would be the way of life for many tribes until the end of the 19th century. Eventually, Blakely would see the arrival of the first non-native settlers.

The island was originally named after U.S. Naval Officer, Johnston Blakely, who served during the war of 1812. The name was inspired by Charles Wilkes, during an 1838-1842 exploration of the Pacific Northwest.

While Blakely may be named after a navy officer, it was Captain George Vancouver who would be the first European to navigate most of Blakely and the San Juan Islands.

These explorations would pave a way for men and women looking for new land and new opportunity in the northwest. Soon settlers and families arrived from all over.

However, even with a sawmill economy, the 1950s through the 1970s would be a time of decay for Blakely. During these two decades, many parts of the island were auctioned off to private buyers.

This would be the case in 1976 when native islander Thomas Crowley donated 976 acres of wilderness land to SPU to build a science research facility.

Per SPU Historian, Adrienne Meier, the facility was not only meant to accommodate small classes and independent research in marine biology, geology, and ecological studies but was also meant to help preserve the islands pure wildlife.

Construction of SPU’s Crowley research lab was completed in 1984 and dedicated in 1985. The hope was that the lab would be surrounded by nature and would stand as a facility that was dedicated, “to the preservation of Blakely Island’s beauty & the environmental education of future students.”

The first resident director of SPU’s Blakely Island field station was longtime professor Dr. Ross Shaw, who assumed the position in 1977. In an article, Dr. Shaw hailed the field station as “one of the best opportunities in the United States for undergraduate field studies.”

Dr. Shaw would stay the resident director for many more years, helping to shape the physical land and the non-physical experience unique to the island and to Seattle Pacific University.

Currently, the island still serves as an educational resource for Seattle Pacific biology, ecology, psychology, and education students. SPU still holds true to the commitment to hold high-level undergraduate research experiences while maintaining a commitment to the islands natural wellbeing. 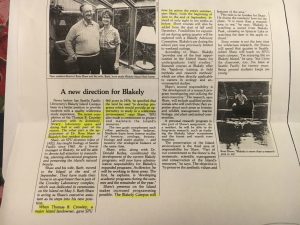 Dr. Ross Shaw was the first SPU Professor to oversee the building and education on the Island