Eric Long, Ph.D., wasn’t surprised when a forester only took two steps onto Blakely Island before declaring, “You have too many deer.”

“I love deer, but I also call them forest rats,” he says. “The deer population is at carrying capacity. The only thing that kills them is that they starve to death.”

According to Dr. Long’s estimates, Blakely has about 12 to 14 times more deer per square mile than mainland, Western Washington does.

A century ago, heavy logging on Blakely opened up the opportunity for a deer population boom. Fewer trees and more sunlight increased brush growth, feeding ever-growing numbers of deer.

Blakely deer also enjoy the absence of predators such as coyotes and cougars, who hunt deer on the mainland but have been largely eliminated in the San Juan Islands. Hunting is uncommon on Blakely, says Long, because it is a private island accessible only by water taxi.

This leaves bottom-up pressures such as resource scarcity and environmental changes as the only forces keeping the population in check.

While mainland deer perish from predation, hunting, and age, Long finds that many deer on Blakely struggle to find enough food to live and reproduce, leading to a subtle decrease in the population each year. 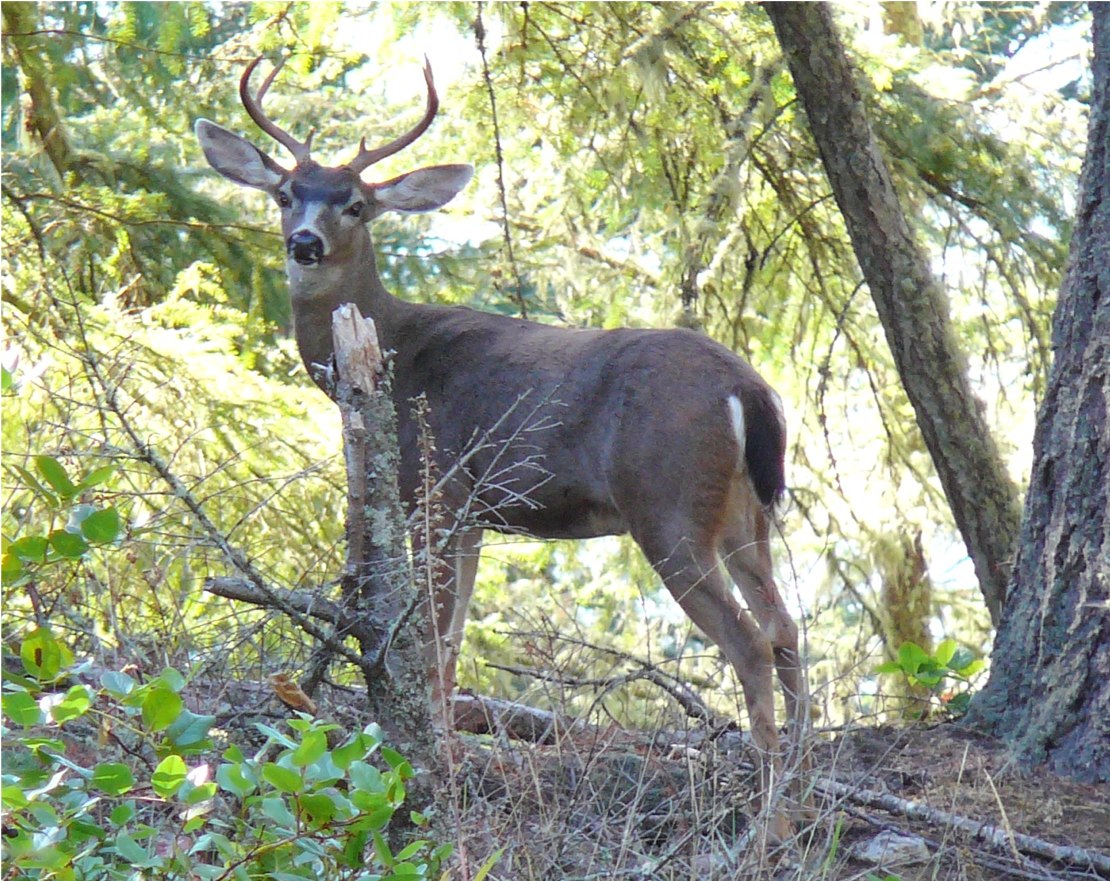 Back when Long conducted research in Pennsylvania, he frequently observed twin fawn births and witnessed female deer becoming pregnant at six months of age. On Blakely, females are lucky to have one fawn a year and get pregnant later due to a lack of nutrition.

“The males, I think, are taking it disproportionately hard,” says Long. Female deer face the most physical stress when they lactate and give birth. This occurs in spring, when there is considerable vegetation available. In contrast, males struggle to find enough food for their energy needs in breeding season, which takes place during fall and winter.

In fact, Long has been discovering fewer male deer skulls than female skulls on the island. He suspects that some males are attempting to swim to nearby islands to find more food and avoid inbreeding, with many likely drowning in the currents. 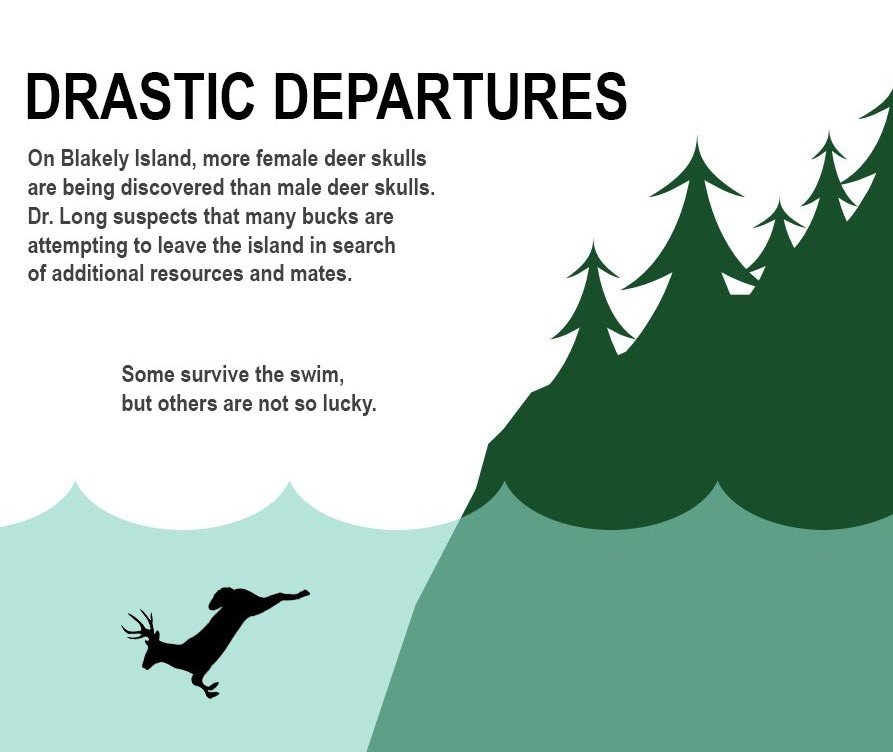 Dr. Long hypothesizes that fewer male skulls are being found than female skulls due to male migration attempts.

The effects of deer overpopulation also extend widely into the Blakely ecosystem.

“Scientifically, deer are incredibly important from an ecological perspective because they eat everything,” Long says. “The deer have a disproportionate impact on forest and forest regeneration.”

Deer consume Douglas firs, maples, native blackberries, and virtually all other plants that are not poisonous to them. In many areas in the Pacific Northwest, Douglas firs dominate the forest canopy. However, Western hemlocks, which are distasteful to deer, have steadily been increasing in number on Blakely.

It’s difficult for new Douglas firs and nontoxic plants to grow because deer tend to eat everything that is under five feet tall. This leads to some plants such as oceanspray to take on an umbrella-like appearance after being nibbled on by deer. When higher deer numbers eat brush, Long explains that some species benefit while species like grounding nesting songbirds are harmed.

Oceanspray, a shrub, is often nibbled into an umbrella-like shape by hungry deer.

Blakely isn’t the only location facing a surplus of deer. A lack of predators has led to deer overpopulation in the San Juan Islands as a whole. However, Long notes that there is a good chance predation was never very common on the islands since fewer carnivores swim beyond the mainland.

“What’s going on Blakely is what is happening across of the U.S. where predators have been eliminated,” says Long. “So, when we study something like Blakely, it gives us a little insight into how important predators are.” 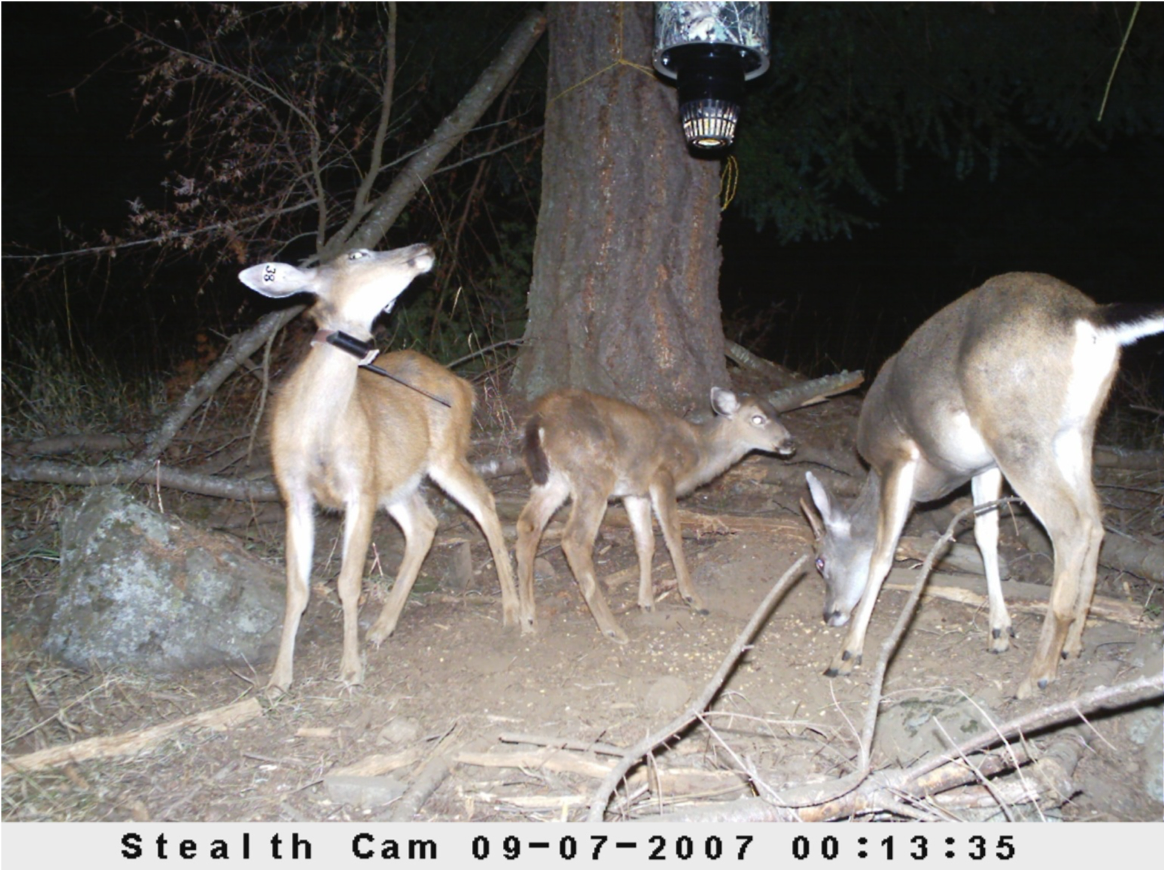 The proportion of deer with radio-collars and numbered ear tags caught on camera is used to calculate the overall deer population. Photo credit: Dr. Long

Fortunately, says Long, there is growing understanding and appreciation of predators, which can potentially help recalibrate species populations in the long term. If the rumors of coyote sightings on some San Juan islands are true, predators could eventually reach Blakely Island.

“Where’s the rental wolf program?” Long asks with a laugh.

“We’ve brainstormed a lot about how the bring the deer population down,” he adds. No extensive measures have been taken yet, but on Blakely, Douglas firs are planted in five-foot-tall tubes to prevent deer consumption, and some hemlock removals have occured. 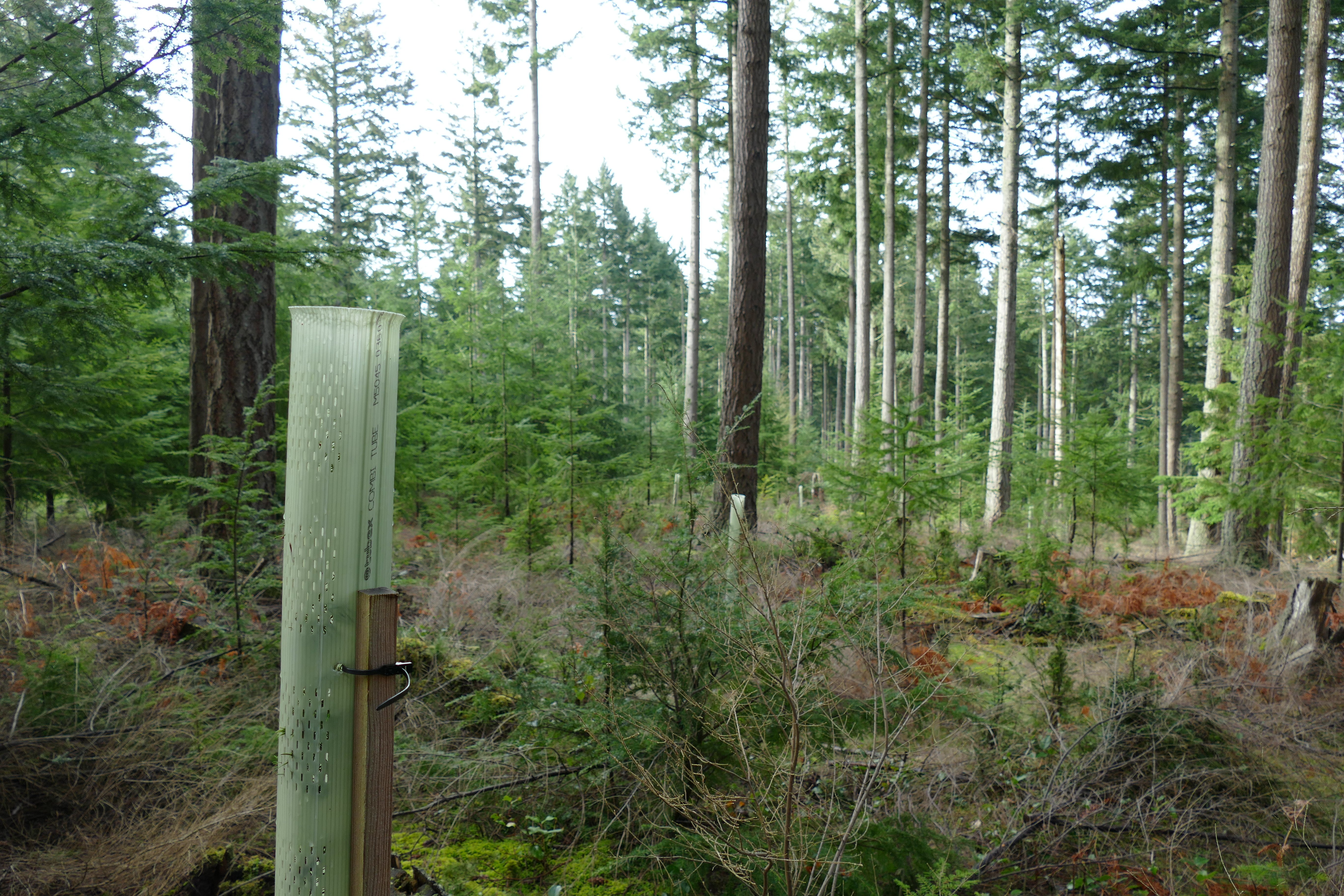 Some young Douglas firs are contained in plastic tubes to prevent deer from eating them. Once the trees outgrow their five-foot-tall tubes, they are safer from consumption.

Long uses the impact of deer on forest regeneration as an example in his ecology and conservation classes. Students are also involved in researching and tracking deer.

“Everything I do is going to be with students,” he says.

Students help measure the island’s deer numbers by following transect paths using a GPS and compass. As they clamber through hills, valleys, nettle patches and swamps, they count each deer they spot. These counts are then inputted into a computer program to estimate the overall island population. 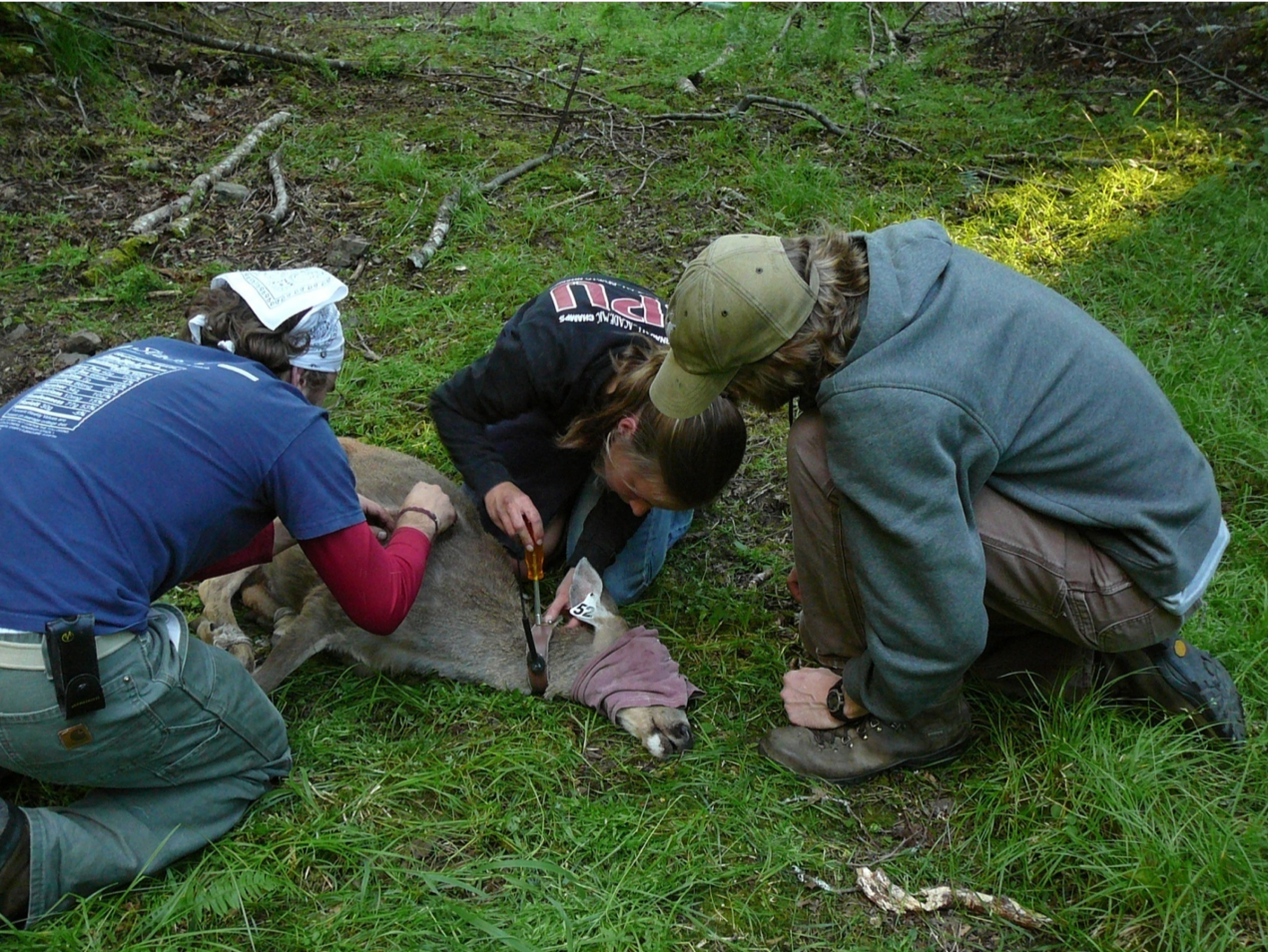 Dr. Long works with former students Luke Davies and Katie Taylor to attach a radio collar to a deer. The collars are used to track movement. Photo credit: Carina Long

During the summer, a handful of students conduct independent field research on the island. Although working with animals and hiking sounds nearly recreational, Long says the work is tough and formative.

“For a lot of my students, it’s been a resume builder,” says Long. “It’s helped give direction to students in terms of what they want to pursue as a career.”

Devising potential solutions to deer overpopulation remains tricky for Blakely and all of the San Juan islands. Given the isolated nature of the islands, Long says it is important to be cautious about assuming what population proportions are natural to avoid adding to the long history of failed biological control programs.

In the meantime, Long is excited to conduct further research alongside students, such as examining whether fencing deer off from certain areas of Blakely will alter vegetation composition.

“I’m not in it just for the deer,” says Long. “I’m in it for the healthy ecosystem.” 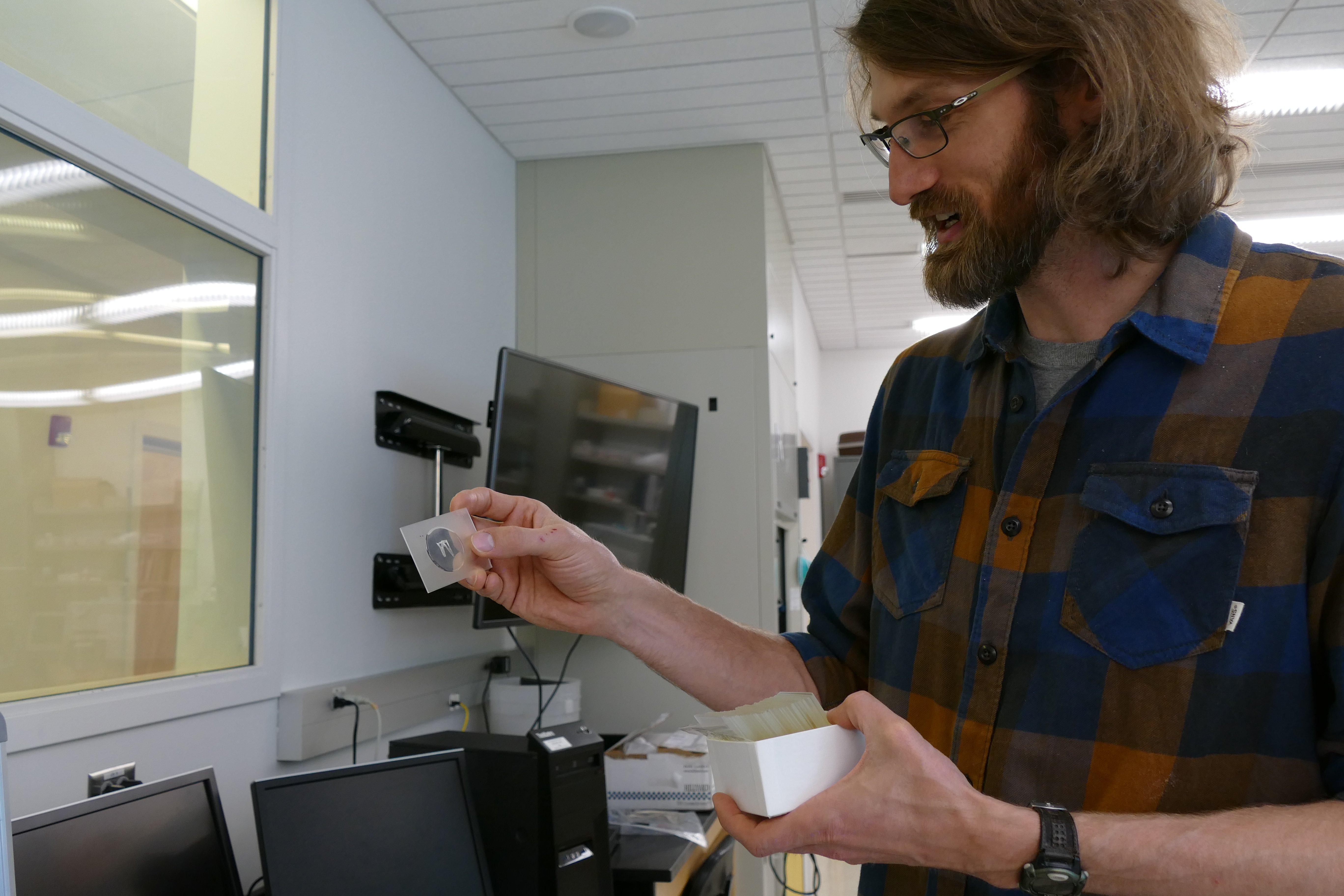 Dr. Long holds a preserved sliver of a deer tooth. Deer teeth develop rings much like trees do, so they are processed to determine deer age.